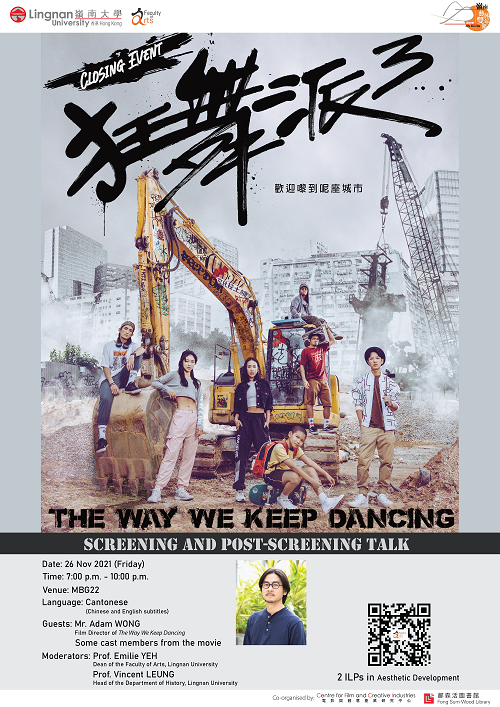 Introduction
As our closing movie, The Way We Keep Dancing (directed by Adam Wong) illustrates the struggles of local artists. The movie continues the discussion of Hong Kong’s street culture started in the popular movie The Way We Dance, and goes deeper into how local young artists struggle to survive with high rents and limited space. The Kowloon Industrial District is an important base for many young creatives in Hong Kong because of its low rents, and a collaborative called KIDA (Kowloon Industrial District Artists) contributed to the production of The Way We Dance. However, the Kowloon Industrial District is turning into a new business area, accompanied by rising rents and increased government inspections. For some artists the announcement of an “Enhanced Street Culture Development Scheme” is an opportunity to promote KIDA, but others see it as sugar-coated poison. How will the members of KIDA pursue their creative dreams amid the harsh commercial and regulatory reality?

About Mr. Adam Wong
Now a renowned Hong Kong film director, Wong graduated from Ying Wa College in 1994 and became an art student at the Chinese University of Hong Kong. His works are well known for their portrayal of local culture and the life of the new generation. In 2013, he was awarded Best New Director for The Way We Dance (2013) at the 33rd Hong Kong Film Awards and the 8th Hong Kong Film Directors Awards. Both The Way We Dance and She Remembers, He Forgets (2015) were nominated for the Golden Horse Awards and Hong Kong Film Awards. His new production The Way We Keep Dancing (2020) has been selected as the closing film of the Golden Horse Film Festival and has received nominations for six awards.